Catching up with A and A Livestock in April

It’s official. Andy and I have now both left our full-time jobs to focus on our farming business. I’ve wanted to be a farmer ever since I was a little girl. It seems surreal to finally be able to call myself one! We’ve got a lot going on now here at A & A Livestock, I’m currently rearing some orphan lambs that we’ll use for our lamb boxes. Rearing orphan lambs is something I’ve not done before; I’ve found it to be fulfilling yet hard work! We will put them out onto the paddocks where our cottage is once it warms up.  Soon we will be calving and lambing.

Last spring was my first time ever lambing and calving. Andy had cattle but it was my bright idea to get some sheep. I’d seen this breed on TV called Wiltshire horns, they interested me as they were a self-shedding breed of sheep. I didn’t even know such a thing existed! So, we found a handful of Wiltshire horn ewes to buy, they were in lamb to a Texel.  I read every book and watched every video I could find on lambing. Hoping everything would run smoothly. Of course, it didn’t. every ewe apart from one needed lambing, I remember Andy grabbing hold of a ewe, turning her backend to me and saying “off you go.” It was slimy and warm; I was terrified of pulling the wrong body part! They say practice makes perfect and I certainly had a lot of practice. But every lamb survived and was absolutely fine once it was out. So, I call that a successful first time lambing!

Last year was not our year for lambing and calving. We also had trouble with the cattle. We’d bought most of our heifers in calf so didn’t have control over which bull they’d bred with. Something we wouldn’t do again. Our first heifer to calve was a shorthorn, she hadn’t made much progress, so we decided to get her into the hurdles to have a look. Everything was presented fine, but the heifer was very tight, so we decided to give her a hand. Andy has been a herdsman for over 7 years, so he knew to get some calving ropes on the calf's legs and pull with her contractions. I jumped in to help. After that, it all goes a bit blurry. A combination of it being the early hours of the morning and the stress of it all I think sent us both into a bit of a panic! 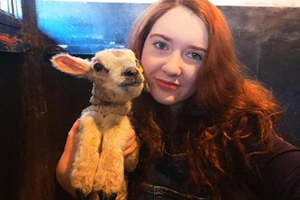 I remember just throwing lube all over the place and at one point having both arms in. The calf fell to the floor and a first we thought it was dead. I remember instantly dropping down beside him and rubbing him hard with a towel and clearing his nose and mouth. He took his first breath and I’ve never been so proud of myself. We then had another heifer that we had to call the vet out for, another calf that had to be pulled out and the scariest for me was when we had a breech birth. I remember Andy looking and saying, “oh no, breech.” My heart sank! Again, it was a blur of birthing fluids, pulling, ropes and lots of lube. But we did it! A beautiful little Red Poll cross Stabiliser heifer calf. Again, I saw to her and got her breathing and that is one of the many reasons I love farming!

Hopefully this year after using our own bull and a good AI bull as well as choosing our own rams, we won’t have the same problems! Keep your fingers crossed for us!