Before farmers can diversify, there's one very important hoop they will almost certainly have to jump through before any building work can begin – planning permission. The Batcheller Monkhouse planning team in West Sussex has a 100% success rate in diversification applications, including tourist accommodation, wedding venues, micro-distilleries, storage, workshops and residential dwellings. Here’s why even the most challenging of planning applications can be approved, with the right help…

The South Downs National Park is widely known for its open downland, steep chalk scarps and far-reaching views across the English Channel. This iconic landscape draws in thousands of visitors each year, but a study undertaken in 2018 found that only around 22% of overnight stays are within the park itself. 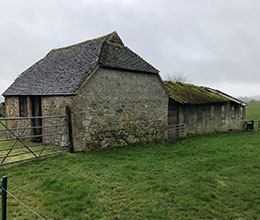 This figure may be partially down to a preference towards larger tourist hubs such as Brighton or Eastbourne. However, there is also a consensus amongst landowners that securing planning permission for new accommodation is both challenging and time consuming, with no certainty of a successful outcome. This has been identified by the National Park as one of the key difficulties in delivering a larger supply of visitor accommodation within its boundary.

A primary objective for the National Park in assessing new development proposals is that great weight should be given to conserving and enhancing its landscape and scenic beauty. More often than not, this becomes a key reason for refusal of planning applications made within the park boundary.

One such example was a planning application for a new self-catered holiday let near Petworth in West Sussex. The application related to two redundant farm buildings: the first was a well-kept brick barn and the second was a 1960s prefabricated building which was in a poor state of disrepair. The application proposed to retain and convert the brick barn, but due to its poor structural condition, the modern building needed to be replaced to match the existing form and materiality.

The application was subsequently refused by the National Park Authority primarily on the basis that the modern building was not worthy of retention and its rebuild, along with the domestication of the bull pen, would result in harm to the landscape character of the National Park and setting of neighbouring Grade II* listed Manor House.

The Batcheller Monkhouse planning team felt that the refusal was not appropriately justified, as the modern building was an existing structure and would need to be rebuilt regardless of its use. The National Park Authority were also silent on the key relevant national planning policies in its determination - specifically, that planning decisions should support the growth and expansion of businesses in rural areas through the conversion of existing buildings and well-designed new buildings.

The applicant was advised to appeal to the planning inspectorate, who reviewed the decision against national and local planning policies. After considering the views of both the National Park Authority and the applicant, the inspector concluded that the presence of the modern building should not be dismissed. The building had a functional form which had served the estate for decades and would have sat pleasingly next to the older barn. The new proposal would result in a modest replacement, which was thoughtfully designed to suit its context. The appeal was therefore allowed, and planning permission was granted.

This case demonstrates how planning policies to protect the landscape and beauty of the National Park can be interpreted by different parties. There is no doubt that these policies are highly important for the continued preservation of the National Park, but there is also national support for the expansion of existing rural businesses and sustainable rural tourism that respect the local landscape to be considered. The subsequently adopted South Downs National Park Local Plan is a better reflection of this approach, although time will tell how this will impact on planning decisions in the future.

If you would like to speak to us about the potential for diversifying your business, please contact Batcheller Monkhouse on professional@batchellermonkhouse.com or 01798 877555.