Food Production Flourishes On the Isle Of Man

75% of land on the Isle of Man is used for agriculture. Proudly the only entire nation to enjoy UNESCO world biosphere status, much of the Island’s rich and varied landscape owes its appearance to the activities of generations of farmers.

Land varies from the undulating south with rich soils supporting mixed farming, to the central uplands with thin soils supporting extensive beef and sheep production and the flat northern plains used for arable and vegetable production.

Food production is a strategically important industry to the Isle of Man and one that is closely supported by the Isle of Man Government Food Matters strategy. Launched in 2014 with the aim of growing the Island’s food and drink sector from £75 million to at least £125 million by 2025, it is encouraging to see that this strategy remains on track, with the sector valued at£100 million at the end of 2018.

A degree of food independence is of great value to an Island nation and the Isle of Man continues to produce a range of staple foods including bread, flour, milk, cheese, meat, eggs, vegetables and fish; all of which score highly in provenance.

Isle of Man Meats works with 202 Manxfarms to produce award-winning, fully traceable beef, lamb and pork produced to the highest of standards. They know all their farmers personally, which underpins exceptional quality right the way through from pasture to plate. 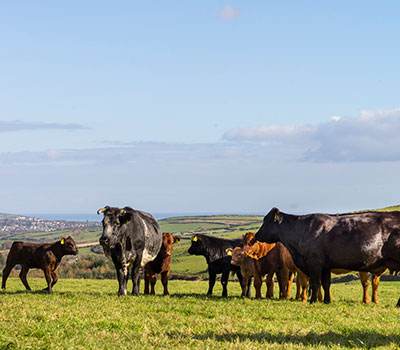 The business has recently announced a strategic partnership with Northgate Foods, one of the UK’s biggest suppliers of fresh and frozen meat, significantly increasing the meat market for Manx farmers.

Likewise, the Isle of Man Creamery is a co-operative of family owned dairy farms, whose farm-assured, grass-fed herds supply the purest milk from which the Creamery produces a range of award- winning cheeses.

Last year, the Isle of Man Creamery introduced the very first plant based milk carton in the British Isles; carbon negative, these are produced using only fully sustainable and renewable sources.

As well as provenance, the Island’s entrepreneurial spirit shines through continued innovation within the agricultural sector, such as the recent introduction of Manx grown quinoa. Such diversification projects are often underwritten by the Isle of Man Government who actively seeks to support new and unique crops that bring exciting opportunities to a truly flourishing sector.

Hon Geoffrey Boot, MHK, is the Isle of Man Government Minister with responsibility for the Department of Environment, Food & Agriculture. Minister Boot has been a Member of the House of Keys since 2015, and his policies have focused on the promotion of environmental protection policies, the growth of the food and drink sector and the conservation of the countryside.