Perthshire Inn Congratulated for Initiative in Support of RSABI

The owners of a Perthshire hostelry have been congratulated for an initiative which got behind Scotch Lamb as well as raising funds for RSABI, the charity which supports people in Scottish farming.

The idea was developed by Eileen Keay and Frank McKie, owners of the Chapelhill Inn at Logiealmond. The couple celebrated St Andrew’s Day by serving locally-produced Scotch Lamb and for each lamb dish sold, the couple made a donation to RSABI.

The lamb was sourced from the Stevenson family at Rashielea, Balmacolly, Bankfoot and prepared by Stevensons Butchers in Stanley. A total of £150 was raised for RSABI by the Chapelhill Inn team, who pride themselves on sourcing local produce.

David Leggat, Vice-Chairman of RSABI, congratulated the couple on the success of their innovative idea and thanked them for the funds raised for RSABI.

“Frank and Eileen are a great example of what can be achieved from the seed of an idea and there certainly appears to be potential to further develop this in future years,” said Mr Leggat.

“This is also an excellent example of the food service, farming, auctioneering and butchery sectors working very successfully together.” 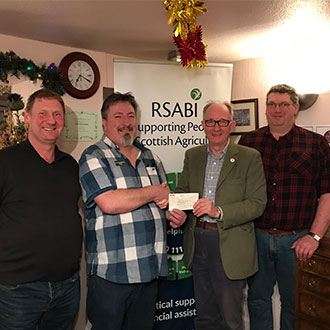 Frank and Eileen’s initiative tied in with the campaign, backed by United Auctions, the Scottish Government, Quality Meat Scotland and NFU Scotland, to make Scotch Lamb the national dish for St Andrew’s Day.

RSABI which provides vital financial, practical and emotional support to individuals and families with links to Scottish agriculture, has launched a major drive to increase membership of its supporters’ schemes.

A key focus of the #supportRSABI campaign is encouraging people to become members of its Supporters’ Schemes which include individual, business and corporate memberships.

The charity is aiming to double its membership numbers in each of these three supporter categories by September 2020.

RSABI also runs a confidential helpline (co-funded by the Royal Highland & Agricultural Society of Scotland), 0300 1114166, which people from Scottish agriculture are encouraged to call if they are in need of support.

Find out more about RSABI here