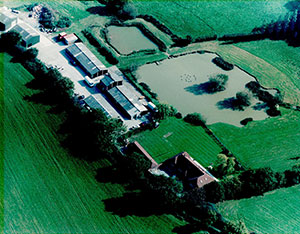 that had previously formed part of an older adjacent farm.  First to be built were extensive pig sheds and 2 Dutch Barns followed a year so later by the first farmhouse in the form a small bungalow.

With only mixed success as a pig farm, Four Oaks changed ownership on a number of occasions in the following years and in the early 1980s was taken on by a farming family, who moved more towards a mixed farming business.  A smallholding of 10 acres would in days gone by have supported a family but as intensive large scale farming became popular, the business became increasingly unviable. What they did establish though was the large lakes which today have become the hallmark of the beautiful location we enjoy today.  Towards the end of their tenure, a few of the outbuildings were let out unofficially to local businesses as workshops to provide a useful additional income but the authorities became aware of this and an Enforcement Notice of Closure was served upon those few workshops.  It was at that point that they decided to move on.

We, Richard and Julie Griffin, who had no previous farming experience but both from a business background bought and moved to Four Oaks Farm in 1997.  We were not nor intended to be farmers and we simply fell in love with the beautiful location but what we did inherit was a large range of rather dilapidated outbuildings. We were faced with 3 choices: 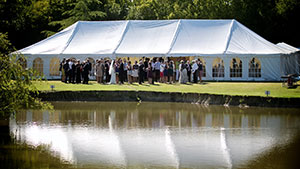 With an invitation from the local council upon our arrival to regularise the workshop position, we chose the third option and after many years of hard work and not inconsiderable expense, we now have 14 restored units which provide a very useful source of income and far more than could be achieved through farming the 10 acres of land.  Without new building costs and only having to refurbish and adapt, it means that rents can be kept at sensible levels appealing naturally of course to local businesses, particularly at the smaller or start up end. We have been fully let for as long as we can remember and when units do rarely come on the market, they are snapped up immediately. It is currently an extremely buoyant market. We also totally rebuilt the farmhouse in that early period which provides a beautiful family home in this quite exquisite environment.

Our daughter, Holly, had always wanted to hold her wedding at Four Oaks Farm and duly in the summer of 2011, we created from scratch a lakeside wedding here for her which was a resounding success which led to close friends attending almost pleading with us to hold their own receptions with us and in 2013 and 2014 and these duly followed.

Clearly we were on to something with enormously positive feedback from all three receptions and in 2015, we established Four Oaks Weddings to provide lakeside wedding receptions on a commercial basis.  Unfortunately, a planning restriction limited us to only 6 events annually and as a result, we have been fully booked every year and again the feedback has, without exception, again been extremely positive.  Unlike many similar venues, we do not insist 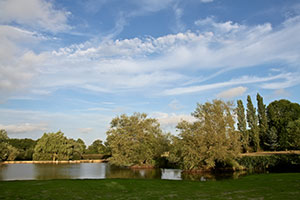 upon the use of particular suppliers meaning that couples can build their own wedding, according to taste and budget and this has proved to be a very popular selling point.  Some pictures are shown here but many more and details of our service can be found at www.fouroaksweddings.co.uk

In conclusion, we consider ourselves to be very fortunate in being able to haven taken Four Oaks Farm from the rather sorry state we found it in to the beautiful location we have now which also provides us with a useful income from the workshops and wedding venue.

We welcome any inquiries about either Weddings at Four Oaks Farm or the workshop side.