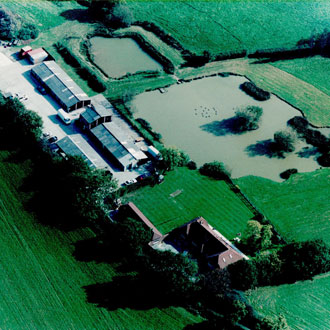 Four Oaks Farm was first established in 1967 as an intensive pig farm on 10 acres of land in Mid Sussex that had previously formed part of an older adjacent farm.  First to be built were extensive pig sheds and 2 Dutch Barns followed a year so later by the first farmhouse in the form a small bungalow.

With only mixed success as a pig farm, Four Oaks changed ownership on a number of occasions in the following years and in the early 1980s was taken on by a farming family, who moved more towards a mixed farming business.  A smallholding of 10 acres would in days gone by have supported a family but as intensive large scale farming became popular, the business became increasingly unviable. What they did establish though was the large lakes which today have become the hallmark of the beautiful location we enjoy today.  Towards the end of their tenure, a few of the outbuildings were let out unofficially to local businesses as workshops to provide a useful additional income but the authorities became aware of this and an Enforcement Notice of Closure was served upon those few workshops.  It was at that point that they decided to move on.