The impact of the 2018 UK heatwave on crops and livestock

As the spring rain continues to fall, many of us might be missing the glorious sunshine of the UK summer heatwave. May businesses also enjoyed a boost from the weather, with retailers witnessing the largest revenue rise in four years, with a 4% rise compared to June 2017.

But for some, the heatwave was a nightmare for their livelihoods — farmers struggled with everything from burnt fields under the scorching sun to droughts putting livestock at risk.

Just how far did the damage spread, and how long will the effects last?

Crops need a few things to survive, from space for their roots and some mulch, to water and sunshine. Obviously, too little is a bad thing, but too much of a good thing can be harmful too. Unfortunately, farmers’ crops suffered from too little rain, and too much sunshine last year.

The Guardian outlined a number of crops that struggled from the overbearing heat and lack of water, including: 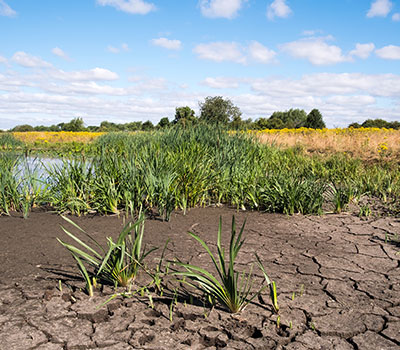 Overall yields dropped around 20%, with onions particularly hit by a 50% decrease in their usual yield. Potatoes struggled with the dry weather, with a yield around 30% lower than average. The crops that were harvested after surviving the long summer proved to be smaller than usual too. In a continued ripple effect, the smaller-sized crops impacted our dinner plates, with the British-loved staple of oven chips 3cm shorter due to the far-reaching summer sun disrupting both British and Belgian crops.

According to data from Farming UK, wheat prices soared in the middle of the year. From suffering through the cold spell of the Beast from the East earlier in 2018, to the summer scorcher, the fluctuating extremes took their toll on crops. As a result, food prices rose by 5%, with the impact filtering through to customer’s weekly shopping costs.

The severe dry spell also impacted the rate of grass growth. According to GrassCheck, grass growth rates plummeted during last June, dipping well below the 10-year average growth during June/July/August.

Of course, the uncharacteristic heat of last summer hasn’t gone unnoticed by our livestock either. Farmers turned to traditional methods to keep their cows cool, such as using old, stone barns that circulate air and keep the inside of the structure shady and cool.

But keeping cool is only the beginning of the problem. Under the scorching sun, many cows lose their appetite and won’t self-feed as they normally would. This led to many farmers needing to encourage their cattle to feed by bringing food to them, and with the grass wilted for so long, the food used was intended for winter feed.

This combination of using up food stocks intended for the winter, plus the longer winter conditions before the heatwave hit, meant that many farmers were faced with the prospect of having to sell their animals. It has been predicted that 2019’s breeding stock will be impacted, and milk yields could fall 15-20%.

Benefits to the warmer weather

It’s not all bad news on the farming front mind. Yes, the potatoes suffered, and the leeks were looking a little smaller than usual, but some crops flourished in the summer sun.

In particular, the harvest for apples on farms was notably great last year. Without the threat of any frost to kill off the apple blossoms, the fruit grew exceptionally well. While apples out in people’s back gardens might be smaller, the irrigation systems in orchards mean the apples had the perfect amount of sun and water, and no frost to contend with.

Plus, the warmer weather in June to August has seen the flavours of the apple boosted, making for some incredible cider. Cider makers commented that juice yields were up, and the natural sugars within the apples increased too.

Meat sales also enjoyed a small boost over last year’s sparkling summer. Between the unexpectedly splendid weather and the gloriously unexpected performance of England in the World Cup, burgers and sausages sales were up 14.4 and 5.1% respectively.

While the extreme weather shifts from the heavy snow at the start of 2018 to the blistering heat in the middle of the year caused trouble for many farmers around the UK, we await to see what summer 2019 holds for rural businesses.